We're an active association with plenty of events throughout the year. Please have a look around this website for these events, as well as news, campaigns and the people involved. For information about our Conservative Member of Parliament, Alberto Costa, please visit his page Alberto Costa, or visit his website, http://www.albertocosta.org.uk. Please feel free to contact us 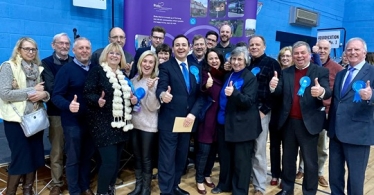 Alberto Costa has been re-elected as South Leicestershire's MP with an increased majority.

The numbers are below.

Alberto said: “I am over the moon to win, and especially with such a large majority. It is an honour and a privilege to be a member of parliament.

“I will continue to do my best for the people of South Leicestershire.”

He went on to praise the team which helped him to victory once again, and said that Brexit was high on his priority list.

It was with great sadness that we learned of the death of Anne Jones recently.
…

Tributes have been paid to a ‘dedicated’ and …

We’re investing more into young people’s mental health to help children get the best possible start in life. Read the article to find out more about what we’re doing to help mental health in the UK.

The Prime Minister has announced that we're increasing funding for schools by a record £14 billion, levelling up per pupil funding so every child has a world-class education.

Justine Greening: Education and skills will unlock our nation's talent

Greening: education and skills will unlock our nation’s talent