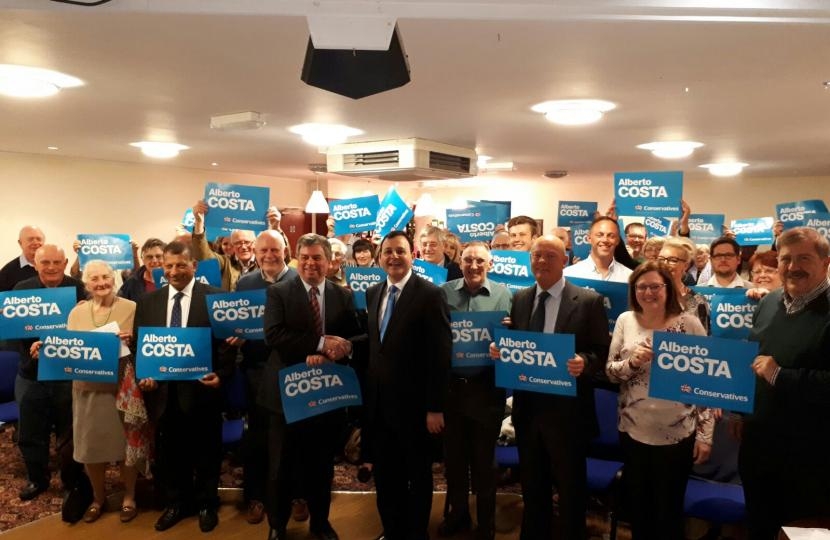 At a Special General meeting of the South Leicestershire Conservative Association Alberto Costa was unanimously re-selected as the Associations Parliamentary candidate for the forthcoming general election on June 8th.

"I am delighted to have been re-selected as the Conservative candidate for South Leicestershire for the 8th June 2017 British General Election. I was honoured to have served as the local MP, living in the constituency, during the last Parliament and as a member of the Justice Committee.

During my two years as the MP, I worked hard to raise local issues in Parliament, ensuring that South Leicestershire had a strong and representative voice in Westminster.  I often held meetings with Ministers or held debates in Parliament on issues affecting my constituents including raising the proposed development of a new prison at Glen Parva to a debate in the House of Commons about Magna Park.

I was particularly proud to be the first South Leicestershire MP to open a dedicated Parliamentary Office in the heart of the Constituency. The office helped hundreds of individual constituents, families, local schools, businesses and charities. It served as a focal point for the constituents of South Leicestershire and ensured strong democratic ties between local people and Parliament. I pledge that, if I am re-elected, I will re-open my Parliamentary Office to, once again, offer the local community a range of Parliamentary assistance.

I also promise that, if re-elected, I will continue to work hard for the people of South Leicestershire, raise local issues at the highest levels of Government and prioritise the concerns of constituents in order to ensure that their voices are heard and their views taken into account when government decisions are being made.

A vote for me will ensure that your voice is heard, help our local South Leicestershire community and strengthen the United Kingdom as we exit from the EU."