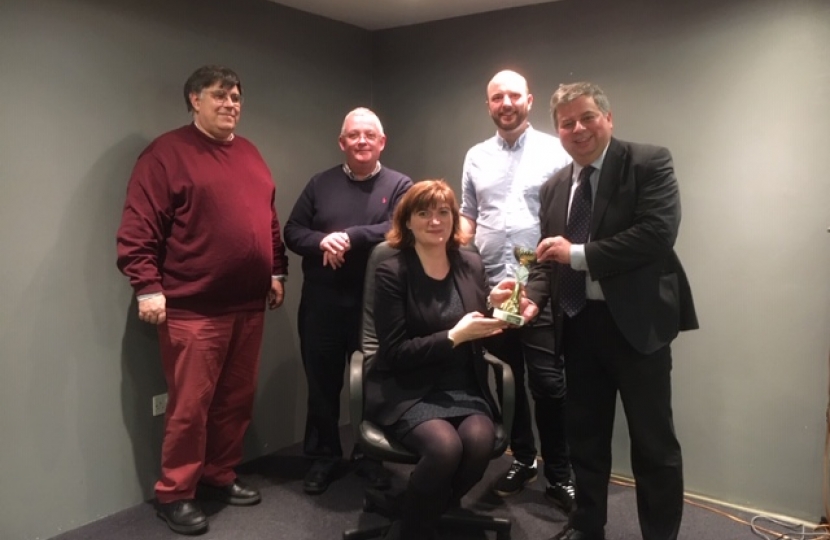 Broughton Astley Branch have been organising Mastermind for quite a few years now and it has become a really popular event in the calendar.  Due to the General Election being called we had to re-schedule to March 13th and due to the current Corona virus situation we only just went ahead!

Neil welcomed everyone and explained the plan for the evening, he gave a brief biography of each of the contestants and advised they had drawn lots for the order, he then invited each to take their place in the Black Chair starting with Peter.  Nicky Morgan, came back to defend her 2018 title and was joined by Robert Ashman, Nigel Chapman and Peter Wardrop. All four were excellent contestants and had clearly been revising for their specialist subjects for some time, with differing success!  Nicky chose Lord North for her specialist subject, Robert, the Adventures of Tintin, Peter, Chelsea Football Club and Nigel The Archers.

Supper of Jacket Potatoes with various fillings was served by Ruth and Vicky and when everyone had been served this was swiftly cleared away for Neil to resume the quizzing.

Before the contestants were called back to the Black Chair, Neil told some of his now famous funny stories which were mostly received with the usual groans.  He then said it had been noted that SLCA reminded some people of the song YMCA.  Rich Tomlin our brilliant ‘sound’ man then played a recording of said YMCA with all present franticly waving their arms in all directions forming the letters SLCA.  Not sure what The Village People would have thought about our rendition of their song but it was fun and repeated at the end of the evening!!

The second round of General Knowledge questions on the events of 2019 was, it has to be said not high scoring.  I think most

people would struggle to recall events when under the pressure of the spotlight, but given time would have remembered.  Following the second round Nicky had narrowly retained her lead and her title.  She has said she will return, (gluten for punishment).  Neil presented Nicky with her trophy which she assured us would join last years in her study.

On behalf of the Broughton Astley Branch, Neil was thanked for his support of the event since its inception, not only sponsoring the contestants, providing the engraved trophy each year and raffle prizes but also all the research on the questions.  Watch this space for the next date and do please let us know if you would like to be considered as a contestant.

Two Years On: Delivering on our Promises

Two years on, we have delivered for Britain. Here's a list of some of our top achievements.