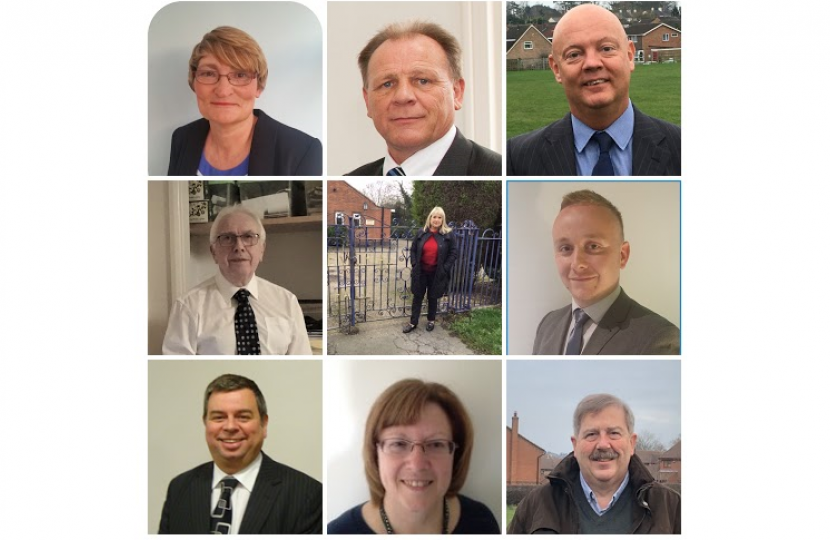 Ryan has lived in the Blaby and Glen Parva County Council Division since he was barely a year old.
He has nearly a decade of experience in the public sector, including his current employment in local government for another council.
This has given him fantastic insight to how councils work from the bottom right through to the top.
He is passionate about his home area and community and will always work tirelessly for its best interests.

Neil Bannister has lived in South Leicestershire with his wife and two daughters for almost 30 years including 15 years in Broughton Astley.
He is a lawyer for the Crown Prosecution Service in Leicester now working 3 days a week.
Neil was a member of the Broughton Astley Parish Council for 14 years and enjoyed making a contribution to the community.
Since 2011 when he was elected as the District Councillor for the Dunton Ward, he has been proud to serve the residents of Dunton Bassett, Ashby Magna, and Ashby Parva, Frolesworth and Leire, all included in this Division. Helping many people in those years on numerous matters from planning to enforcement of fly tipping, to assistance with business grants. In that time, he has developed a strong and excellent working relationship with the Parish Councils in my Ward.
He hopes to be a worthy successor to Cllr Bill Liquorish.

Nigel firmly believes in community values and has held various volunteer roles.
He has been a ‘Special Police Constable’ and more recently Chair of Governors at Greystoke Primary School where his daughter attended.
During lockdown Nigel has been working hard with the local food bank to deliver parcels to people who are struggling.
He been a Parish Councillor for over five years and is now in his fourth term as the Chairman of Enderby Parish Council. During this time, he has set up a multi-agency surgery (council/police/care) in Enderby Library, which is held monthly to listen to the concerns and views of the people in this area. This has been very successful and has been used as an example by the County Council of great community engagement.

Born, bred, living and working in the County Division, Les and his wife and family have lived in South Whetstone for over 30 years.
As a local resident, he understands and appreciates concerns and knows how everyone is directly affected by any decision that involves our family, friends and communities.
The environment, air pollution, social care, health, education and funding and the need to deliver housing are well known as some of the greatest challenges that we face. He knows the area very well and is determined to make your voice heard.

Helen Richardson (known as Louise) has lived in the area for 33 years with her husband Terry and two daughters, who now have families of their own.
Louise has worked within the community over the years running, and being involved with, several associations and groups for the benefit of local children and residents. She has also worked in the volunteer sector providing support for Dementia and Alzheimer day care and support within the home for families experiencing difficulties. She works for the benefit of the area and its residents, assisting with issues that arise for residents where she is able.
Louise also runs her own charity supporting those less fortunate in Tanzania.

Rosita Page has lived in the area for over 40 years and has always been actively involved in the local community.
Since 1999 Rosita has been a District Councillor representing Ullesthorpe, Bittesby, Bitteswell, Claybrooke Magna and Claybrooke Parva.
She was elected to the Leicestershire County Council in 2005 to represent these villages as well as Lutterworth. Rosita is acutely aware of her responsibilities as a councillor and greatly enjoys her involvement with all aspects of community life. She finds responding to the needs of individuals who make up our community very rewarding especially in these challenging times.
She is very proud to be part of this big diverse family and will always endeavour to assist where she can, whilst trying to protect front line services.

Terry Richardson has lived in Narborough with his wife and family since 1988. Terry took early retirement in 2014 to devote more time to public service, which is something he is very passionate about.
Terry has been a member of Narborough Parish Council for 32 years, during which time he has served as Chairman for 3 years. He also served as a school governor for some 22 years at a local primary school.
Terry represents Pastures Ward on Blaby District Council and is currently Leader of the Council.
Terry is committed to working for and with the local community in an area that he loves.

Maggie Wright lives in the village of Thurlaston with her husband Neil, they have two sons.
Her wider family have, for several generations also lived and worked in the “Fosse Villages” giving her a wealth of local and historic links to the Stoney Stanton and Croft County Division.
Maggie is Blaby District Councillor for the Normanton Ward. Passionate about community life, Maggie regularly organises, participates and supports local events. She has served on Thurlaston Parish Council for over 14 years, eight as Chairman.
She is a member of her Parish Chapel and a School Governor. For 16 years, Maggie worked for Age UK Leicestershire and Rutland as a Residential Care and Nursing Homes Advisor.
Maggie understands and appreciates residents’ concerns because they directly affect her and her family. She shares the local GP surgery, understands the concerns regarding both the national strategic rail freight terminal and local strategic housing proposals. She experiences the increasing levels of traffic and worries about the pollution.

Born in Coventry, Mike served a 5-year engineering apprenticeship with tractor manufacturer Massey Ferguson. At the age of 30, he attended Nottingham Polytechnic and qualified as a Design School Teacher.
Teaching at Earl Shilton Community College during the 1980’s. On returning to engineering, he spent 25 years as a crane surveyor, owning his own business and employing 20 ex-military engineers.
He has lived in South Leicestershire for nearly 50 years, the last 10 years in Sharnford.
During this time he has been fully involved within the community, Sharnford Traffic Action Group (STAG), Environment Group, and lately the Sharnford Community Support Group, helping residents struggling through lockdown.

The annual and popular SLCA Mastermind event was a sold-out affair on the 18th November as we gathered at the Broughton Astley Conservative Club to watch the bounty of brainy boffins battle it out for the SLCA Mastermind Trophy.