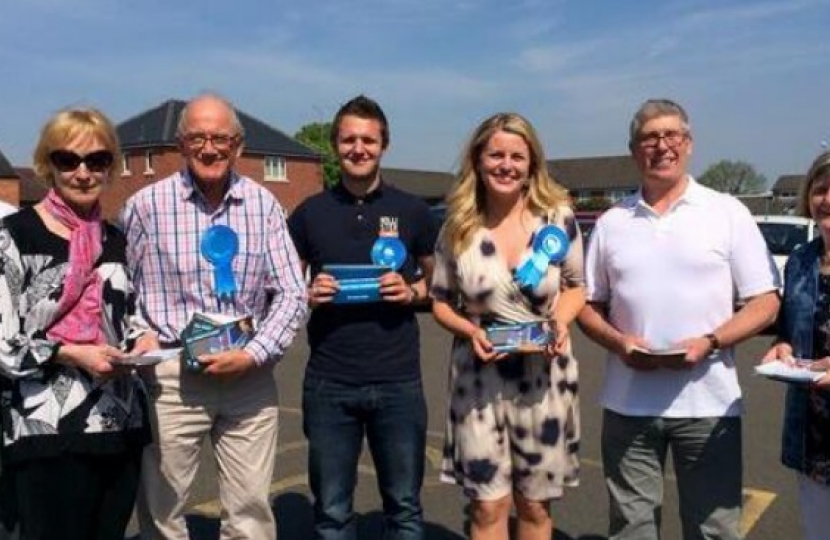 The current Conservative Member of the European Parliament (MEP) Emma McClarkin, paid a visit to a sunny Blaby on the run up to the European Elections which take place this Thursday - 22nd May. Polling stations are open from 7am till 10pm.

Emma will be number one on the party’s list for the East Midlands region.

Electors in European elections choose a political party, rather than individuals, to vote for. MEPs are then elected from different parties based on the proportion of the vote received by that party across the region.

In the East Midlands, five MEPs will be elected with Emma McClarkin being joined by four other Conservative candidates - Andrew Lewer, Rupert Matthews, Stephen Castens and Brendan Clarke-Smith - to contest the elections

“Emma McClarkin has done a fantastic job since being elected in 2009 putting the interests of both Britain and East Midlands at the forefront of the European Parliament.

“We want to continue our campaigning for the East Midlands in Brussels with the re-election of Emma and the election of Andrew, Rupert, Stephen and Brendan, who are all first-rate candidates.

“This is a very important election for the Conservative Party and I hope voters will remember our promise to give them a real free choice on EU membership.”

The five candidates will have plenty to campaign on after Prime Minster David Cameron became the first mainstream political leader to offer voters a referendum on EU membership.

He has pledged that if the Conservatives are returned to government in 2015 a new negotiated settlement with Europe will be put to the public vote within two years - www.letbritaindecide.com.

“For 13 years Labour handed power to Brussels. Conservatives are now delivering a better deal for Britain in Europe, protecting our interests and helping the UK compete in the global race.

“Conservatives are the only party to have back a referendum in Parliament to give the British people a say on our EU membership.

“Our great candidates in the East Midlands show we have the people, policies and leadership to deliver a reformed EU. All Labour offer Britain is more spending, more borrowing and more debt.”