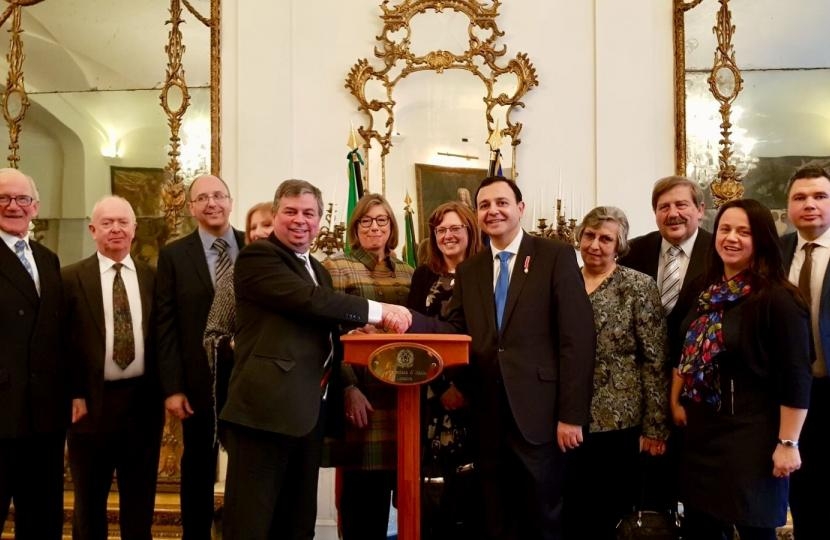 South Leicestershire MP, Alberto Costa and fellow Midlands MP, Sir Edward Leigh have received knighthoods from the President of Italy in recognition of the work they do fostering better relations between the United Kingdom and Italy in their roles as co-chairmen of the All Party Parliamentary Group for Italy.

Alberto attended a ceremony at the Italian Embassy in London on Monday morning where, in the presence of family, friends, fellow MPs and colleagues from the South Leicestershire Conservative Association, the Italian Ambassador conferred the knighthood of the Order of the Star of Italy.

Sir Edward Leigh MP, who had received his knighthood earlier in the year, and Alberto reiterated that leaving the European Union did not mean leaving Europe and that Parliament would work hard for a smooth and orderly Brexit.

Alberto said “Sir Edward and I, along with our Parliamentary colleagues are helping to ensure that we strengthen the close bonds between the UK and Italy. For me the issue of securing the rights of UK citizens in Italy and across the EU, as well as protecting the rights of EU nationals as we leave the EU is of paramount importance.”

Later on Monday afternoon in the House of Commons, Alberto commended the Prime Minister for her success in having negotiated an agreement in principle for the rights of UK citizens living in the EU as well as securing the rights of EU nationals living in the UK. This was achieved last Friday through the joint progress report agreed between the UK and the EU.

In response the Prime Minister said, “I am pleased that agreement has been reached, as reported in the joint progress report. I also congratulate my honourable friend, who has recently been honoured by the Italian government. Many congratulations.”