Trevor was born in Oldham, Lancashire and on leaving school at 15 commenced a career in Local Government as an Apprentice Gardener with the Borough Council.
He spent 3 years in the Army [RASC] at the War Office in London, on a special posting and on leaving continued in horticulture at the Royal Botanic Gardens Kew, gaining the Diploma in Horticulture.
Trevor was appointed the first Parks Superintendent to Blaydon-on-Tyne UDC, he then moved to Narborough in 1988. He is married with a son who works in Finance and a daughter who is a Secondary School Teacher.
For 13 years Trevor was Clerk to Broughton Astley Parish Council and is currently a Member and Past Chairman of Narborough Parish Council.

Trevor is perhaps better known locally as the Reader at All Saints Parish Church; President of the Narborough and Littlethorpe Heritage Society and a Committee Member with the local Allotment Association.

He is also a Trustee and Director of the National Allotment Gardens Trust and for 18 years has been the Secretary of the NSALG - East Midlands Region Allotments Committee.

Trevor was Vice Chairman of Blaby District Council in 2016 and was chairman in 2017. 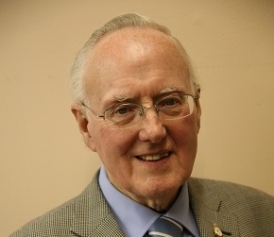