Nigel Grundy was born in Bolton, Lancashire, his early career was with the Devere Hotel Group as deputy general manager and he worked all over the country.
Later Nigel went into the motor industry moving from salesman to general manager with the Co-op Group.

He then moved to Cyprus for eight years where he met his partner Claire. They both moved back to Claire’s home town of Leicester, they have a ten year old daughter.

He has been a ‘Special Police Constable’ and more recently a School Governor and Chair of Governors at Greystoke primary school, Narborough where his daughter attends.

He been a Parish Councillor for over three years and is now in his second term as the Chairman of Enderby Parish Council. During this time he has set up a multi agency surgery ( council/ police/ care) in Enderby library which is held monthly to listen to the concerns and views of the people in this area. This has been very successful and has been used as an example by the County Council of great community engagement.

Nigel says “I set this up because I thoroughly enjoy meeting parishioners and helping to make improvements to the great area we live in. I hope to use my knowledge of schooling and supporting local residents in order to represent my fellow residents of the Pastures Ward”. 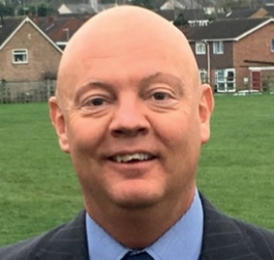